Day 3 in Oregon and other stuff... 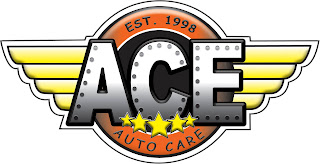 Already the second week in October and the weather is hot then cool then hot. But I am seeing some color start to show on a Maple tree that I planted and that makes me happy. I told you that I would show you the logo I finished last month. I do like it. It was a redo from another logo they had that needed a face lift. The owner of this logo will place it on their building, their website, and even on their door mats - they are really excited and I am happy they are happy with my job!

So lets go back to Oregon for my third Day. A recap - Thursday I flew in, Friday we figured stuff out and where stuff was, and now it is Saturday and the Festival truly begins. But first... there is... the Elevator. 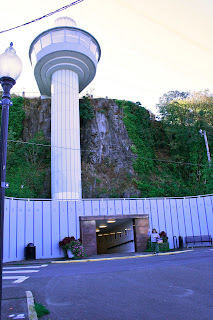 September 25, Friday, another day of fun! Elaine was interested in seeing the elevator. I said, an elevator, what are you talking about - you want to see an elevator? She said she heard that Oregon City had one of the 4 outside big elevators in the world. So Fran, Elaine and I drove to the older part of Oregon City and went for a 130 foot elevator ride. What is going on here is that the town is split by a bluff so to get to that part of the city quickly, one takes an elevator ride. And this has been in service since the 20's. Of course the elevator itself has changed many time since then.  It really was cool and so fast to ride up. From the top we could see  the river and the city below. For more information on this, take this link. Oregon_City_Municipal_Elevator


After our ride up and down the elevator, we took  Hwy 99 which travels along the Willamette River to Canby were the fiber festival is held. We  stopped to look at a paper mill and where the river is diverted to create power. Water going every direction. Then on to the show. 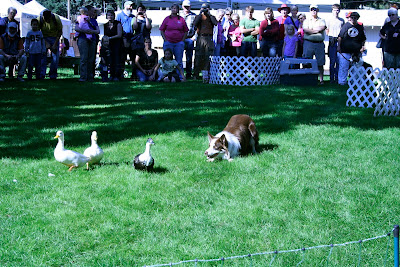 After arriving at the festival  I watched some of the sheep and my friend Martin Dally show his sheep. Leaving the sheep ring, I headed to the lawn were a sheep dog was moving some ducks around the working pen.  Look at that dog, is he intense! I then checked out some bobbin lace knitters, wow, too many bobbins for my brain to keep track of. But I sure learned something from these really nice people that were demostration this art.

At noonish I played groupie by going to see the Knitmore girls. My favorite podcasters. That was fun and they had wonderful goody bags to give out. And while I was there I bought some super pretty cashmere and silk roving, like I don't have any... ha ha. knitmore girls Blog .


Then I headed to the sheep show ring and watched some of the angora show, and finally I checked out the vendor booths and then spindle spun  with my friends Susan and Terry at their rainbow yarns booth.  Terry was spinning some of the most beautiful rust red Pygora and silk roving, I had to have some of that also, dyed by her and Susan... ok so I didn't need more roving.


I had a great day even though I felt like I had a disease that the goat barn would get. But what it was is, when one is a goat judge at the show, one can not go in to the goat barn before the show - so I didn't get to hang out were I usually like to hang out - yep, in the barn. Anyway, today was a wonderfully warm sunny day, tomorrow I will be judging most of the day starting about 9 am so I am very glad to get to do all this sight seeing today.  One more photo I like I took from the  window on our 4th floor room at the hotel.

Posted by Jill Gallagher at 5:10 PM 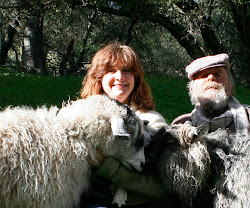 Other Places you can find me